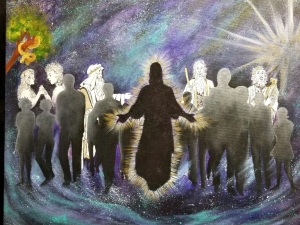 Although the Christian Bible consists of 66 books written by various authors over many centuries, the biblical writers  shared the assumption that God was directing and fulfilling his plan in human history. Additionally, these writers often pointed to the same set of turning points in salvation history–specific times when God made covenants with his people. For instance, as the Psalmist celebrates God’s redemption of his people and the giving of the Torah, this new relationship fulfills previous promises God made to their patriarch Abraham (Psalm 105:42-45). In Galatians 3, the Apostle Paul explains how Christ fulfills the covenant promises made to both Abraham and Moses. The Bible seems to assume that God’s overarching story has chapters or turning points marked off by covenants. Covenants were an ancient form of agreement that God used to communicate his relationship with his chosen people. Covenants were more than contracts or promises but an all-encompassing bond between God and people.

When teaching on the overarching story of the Bible, covenants provide important divisions that can serve as chapters in a teaching or preaching plan. Every covenant has its own distinctive elements that need to be discussed. For instance, covenants can be conditional, unconditional, or have some conditions alongside unconditional parts. Scholars also disagree on whether certain promises constitute a full-blown covenant. Nevertheless, the covenants of scripture provide a structure from which to tell the overarching story of the Bible. From that structure, a teacher probably should address additional significant parts of the overarching story. For example, the outline below ends with a look at the new creation as described in the book of Revelation. The new creation technically is not a covenant but a fulfillment of previous covenants. Likewise “The Fall” is not a covenant, but it is essential for understanding the rest of the story and subsequent covenants (it also contains the protoevangelion, which foretells God’s redemptive work).

Walking through each of the covenants of scripture goes beyond the scope of this post. In the endnotes, I provide some resources that will help you identify and look deeper into the covenants of scripture as well give you ideas  on what to include in your own presentation of the overarching story of the Bible. These resources also discuss the importance that the various epochs of scripture have for interpretation. Many interpretive errors have been made because the interpreter did not consider which epoch/covenant a biblical text occurred in.

Below I provide the preaching outline that I recently used when leading my church through the overarching story of the Bible.  If  the church calendar had allowed it, I could have included other covenants or significant events in the overarching story. The reader will note that I did not address the covenant with Noah or Judah. I also decided to devote multiple weeks to subjects that technically all belong under the New Covenant of Christ. The sermons that correspond to each of the outline points can be listened to at : https://www.sbcsouthhadley.com/sermon-archive/  in the “HIS Story, Our Story, Your Story” sermon series.

An Outline of the Overarching Story of the Bible

Lawrence, Michael.  Biblical Theology in the Life of the Church. Crossway, 2010.