In today’s post, I draw your attention to a new book that examines second century Christianity: Michael Kruger’s Christianity at the Crossroads: How the Second Century Shaped the Future of the Church. Downers Grove: Intervarsity, 2018. 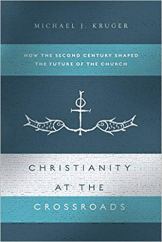 While Christianity was born in the first century, the second century was a crucial time of transition and development. Unfortunately most Christians are unaware of the second century’s huge influence on the past and present of their faith. Michael Kruger’s latest work, Christianity at the Crossroads, helps rectify the situation by providing an easy-to-read introduction to this time period.

In Christianity at the Crossroads Kruger purposes to “provide an overall introduction to this critical period . . . a general overview of what Christianity was like and what it faced during this century” (vii). Kruger pursues this purpose from a conservative viewpoint while ably referencing primary sources and engaging with broader scholarship. Those looking for such an introduction (college/seminary students, church leaders, and pastors) will enjoy this volume. Those looking for a more exhaustive study may find some guidance in the footnotes and primary source references, but will not find much in-depth or ground breaking material herein.

Michael Kruger’s previous work on important early church issues positions him to engage the topic well. Those familiar with Kruger’s writings on the canon (Canon Revisited. Crossway, 2012), early church battles over heresy (The Heresy of Orthodoxy. Crossway, 2010), or textual criticism (The Early Text of the New Testament. Oxford, 2014) will recognize some of Kruger’s previous arguments and themes.

The volume examines five main areas: 1) The sociological transition of Christianity away from Judaism and into its own distinct identity (and predominantly gentile ethnicity). 2) Christianity’s interaction with Roman cultural-political dominance. 3) The transition from a plurality-of-elders ecclesiastical structure to leadership by a bishop. 4) The tension between theological diversity (often manifested in “heresy”) and a unified “rule of faith.” 5) Textual transmission and the early development of the canon.

Krueger treats a broad range of issues in each area, which is one of the strengths of this introductory work. For instance, in the chapter on Christianity’s interaction with Roman cultural-political dominance, Kruger touches on Roman suspicion of Christian practices, criticism by philosophers and satirists, political persecution in various regions, and the response from Christian apologists. Kruger guards against his presentation becoming an abstract collection of issues by citing many primary sources to give some specificity and historical grounding to each topic.

I especially appreciated Krueger’s treatment of “the rule of faith” in the second century church. He traces the presence of this “rule” (a summary of core apostolic teaching) across several patristic witnesses and then summarizes its basic content. Finally, he measures the rule of faith against the only existing apostolic teaching we have, the first-century scripture, to demonstrate that the rule had the best claim to the original apostolic witness. The “great church” clung to this rule of faith to preserve the most ancient and faithful witness in the midst of diverse theological challenges from other groups also calling themselves Christians.

Those looking for an overview of the issues the church faced in the second century will find a welcome resource in Christianity at the Crossroads. The topical arrangement and subject index make subsequent recall and review of the material easier and the many primary source references encourage further study.